Here is the manifesto of the ruling coalition (@LiberalAus, @LNPQLD, @The_Nationals & Country Liberals) in July 2016. Excerpts are on our own.

[More Jobs and Growth through Increased Trade and Investment]
KEY COMMITMENTS
… Up to 10,000 new jobs are expected to be created in the financial services sector alone by 2030. In the first year of operation, our agreements with Korea and Japan delivered real benefits for the agricultural sector: the value of Australian exports of fresh beef to Japan increased by 22 per cent to just over $1 billion; exports of bottled wine to Korea increased 53 per cent; and China’s imports of fresh Australian lobster between January and March were triple those of 12 months ago.
Australia’s economy will be $24 billion larger by 2035 because of the Coalition’s free trade agreements with China, Japan and South Korea. The free trade agreements with China, Japan and South Korea are forecast to create some 7,900 jobs this year and over 14,500 jobs in 2020. …
We will continue to drive job growth through trade and investment by:
– delivering a company tax cut for Australia’s small businesses
– establishing a single window for all export documentation
– implementing the Trans-Pacific Partnership Agreement
– negotiating free trade agreements with India, Indonesia, the European Union, the Regional Comprehensive Economic Partnership, and Pacific Island countries under PACER Plus, as well as pursuing new trade opportunities, including in the Indo-Pacific region.
– connecting businesses with export markets
– establishing a Professional Services Mutual Recognition Unit
– actioning the recently released ‘National Strategy for International Education 2025’ and the marketing plan ‘Australian International Education 2025’
– securing access for local exporters to the multi-billion dollar government procurement markets of 45 economies by joining the WTO Government Procurement Agreement

THE CHOICE
… Labor had six years to conclude these agreements and achieved little. The Coalition’s three free trade agreements will add billions in additional income year-on-year and thousands of additional jobs. Real wages will be higher. …
Labor closed Australia’s live animal trade overnight, damaging our reputation as a reliable supplier of quality agricultural produce.
Labor let free trade agreement negotiations languish while our exporters lost market share to our competitors. …
Labor damaged our reputation as an investment destination when it introduced the mining and carbon taxes. The Coalition abolished the mining and carbon taxes. Under Labor, the number of unemployed increased by 200,000, productivity declined by 0.7 per cent per year, working days lost to strikes doubled, and business red tape increased.
Labor’s policies threaten the successful transition to the new economy, through damaging tax changes that will cut existing property values, a 50 per cent increase in Capital Gains Tax that will hurt investment, and refusal to support re-establishing the ABCC.
Bill Shorten has promised around $60 billion worth of additional spending on top of what is currently in the Budget, leaving a massive black hole in Labor’s books. …

[Smart Cities]
KEY COMMITMENTS
Australia’s cities are home to the majority of our population and responsible for more than 80 per cent of national economic output. Liveable, accessible cities with clean environments are now essential economic assets.
In the knowledge economy, people are our greatest resource, and smart cities put people first. The Coalition will innovate with smart policy, smart investment and smart technology to ensure our cities are more liveable, more productive, and more prosperous.
Our cities are at the frontline of action on climate change. That is why the Coalition will establish an investment fund to accelerate the deployment of clean energy, renewable energy and energy efficiency technology in cities through the Clean Energy Finance Corporation.
These investments will drive new jobs and enterprise, reducing greenhouse emissions while making our cities more resilient, liveable and putting downward pressure on energy bills.
Projects must demonstrate value for money and earn a financial return for taxpayers.
Financial returns will be reinvested in new projects, creating a sustainable pool of funding with an annual investment target of up to $100 million each year.
The Coalition will also establish a $50 million competitive Smart Cities Program for local governments to collaborate and apply innovative technology-based approaches to improve the liveability of cities and their suburbs. …

[a Safe and Prosperous Australia]
KEY COMMITMENTS
The Government is strengthening Australia’s national security and enhancing our prosperity after years of mismanagement by Labor.
Our economic diplomacy strategy is delivering real benefits to Australian businesses and our economy and is generating jobs.
The Coalition’s emphasis on consultation and mutual respect is building trust in Australia as a reliable partner of choice in the Indo-Pacific region.
We are broadening and deepening our bilateral relationships with key strategic and economic partners including the United States, China, Japan, South Korea, India, Singapore and Indonesia.
We are keeping Australians safe from terrorism by cancelling the passports of foreign fighters, making it an offence for Australians to enter declared terrorist-controlled areas in Syria and Iraq and working closely with regional friends and partners.
We are refocusing Australia’s diplomatic, trade and development efforts on our region.
We are delivering a sustainable, effective and affordable aid program that helps developing countries reduce poverty and promote sustainable economic growth, giving priority to women and girls, education, health and aid-for-trade.
The Government’s student overseas study program, the New Colombo Plan, is supporting Australian university students to study and undertake internships in more than 35 countries in our region. This is building a generation of future Australian leaders with deeper understanding of our region and relationships to last a lifetime.
The Coalition’s foreign policy prepares Australia for the opportunities and challenges of the 21st century by:
– expanding Australia’s overseas diplomatic presence
– boosting Australia’s crisis response capability
– establishing regional health security partnerships
– supporting a Pacific Women Mentoring Programme
– developing a contemporary foreign policy strategy that builds on our achievements and focuses on 21st century challenges and opportunities

[Jobs and Growth in Regional Australia]
KEY COMMITMENTS
Regional Australia is critical to Australia’s economic prosperity and is home to around one third of Australia’s population.
Regional Australia accounts for around 65 per cent of Australia’s export earnings by value and is a major source of domestic and international tourism. 45 cents in every tourism dollar is spent in regional Australia.
Regional communities are benefitting from the Coalition’s economic plan.
Our export trade deals have made it easier for regional businesses to export to Asia and our tax cuts for small business are creating new job opportunities.
Regional communities are an attractive place to live and invest.
They have a strong culture of innovation, offer diverse employment options, and attract the skills and talent needed to build successful businesses.
While the opportunities for regional Australia have never been greater, the Coalition recognises that some regions have been impacted by the slowdown in mining, falling commodity prices and changes to the manufacturing sector.
The Coalition will boost jobs, investment and growth in regional Australia.
We will establish a $200 million Regional Jobs and Investment package to deliver regional jobs and growth.
The Regional Jobs and Investment package will incentivise local businesses to invest and employ, enable regional communities to upgrade local infrastructure and deliver new skills and training programmes.
The package will be delivered in partnership with local communities.
Community leaders and local experts will be engaged to assess the needs of regional communities and develop local investment plans covering the following three areas:
– Business innovation grants
– Local infrastructure
– Skills and training programmes
The package will support regional communities to diversify their economies, create new export opportunities and help boost regional jobs.
The Coalition will contribute $200 million to the Regional Jobs and Investment package and will leverage a further $200 million in matched funding. Individual regions will be able to access up to $30 million in funding.
Our commitment will boost confidence, jobs, investment, and growth in regional Australia.

THE CHOICE
… Labor’s policies will fail to deliver jobs and opportunities for regional Australia.

[A Stronger Economy and Balanced Budget]
KEY COMMITMENTS
The Coalition’s policies are fully costed and we will deliver an improvement to the Budget bottom line.
Our responsible and transparent approach to fiscally sound policy means that, compared to the Budget bottom-line in the Pre-Election Fiscal and Economic Outlook (PEFO), we will deliver a net improvement of $1.1 billion over the next four years.
By contrast, Labor worsens the PEFO results by $16.5 billion over the four years, despite increasing taxes.
Only the Coalition has a credible, fully-costed economic plan that will deliver jobs, promote economic growth, and deliver a secure future for Australian families.
Our economic plan is seeing results. Since the start of the election campaign several updates to economic indicators have been released by the Australian Bureau of Statistics:
– latest growth figures show Australia’s economy grew at more than 3 per cent over the last year
– our economy is growing faster than the US, UK, Canada and well above the OECD average
– export volumes and trade balance improved in April
– the current account balance strengthened in March
– household consumption remained solid, growing at 0.7 per cent through the March quarter and 3 per cent over the year
– the number of employed Australians has increased by 225,000 over the year to May 2016 and more than 460,000 jobs have been created since the Coalition came to government
– the unemployment rate is 5.7 per cent, down from its peak of 6.3 per cent in July 2015
– consumer confidence as measured by the Westpac Index remains elevated at a level of 102.2 in June – above the 10 year average and nearly 7 points above the confidence level a year ago
– business conditions and business confidence as indicated in the respected NAB survey remain positive and the AIG Performance of Services Index is stabilising
– our credit rating remains stable at the top level of Triple-A
The Coalition’s fiscally responsible and transparent approach to policy will mean lower taxes for families and businesses, greater certainty and stability, and more opportunities for job and real wage growth.
Our approach guarantees the protection of Medicare and funding for health, education and infrastructure.

THE CHOICE
The Coalition has a strong economic record and a plan to continue to grow our economy in order to provide jobs into the future.
The Coalition inherited a Budget in chaos from the Rudd-Gillard-Rudd years.
Living within our means is a key part of our National Economic Plan.
Unlike Labor, all our policies are fully funded.
This means we guarantee the protection of Medicare and funding for health, education and infrastructure.
Labor have rejected this commitment. They are instead raising taxes and at the same time make the Budget deficit worse over the next four years.
Under Labor, the deficit will be $16.5 billion higher than under the Coalition.
This means Labor will be borrowing an average of $11 million more than the Coalition each and every day over the next four years.
Three eminent economists have confirmed Labor will put Australia’s AAA credit rating at greater risk.
This is simply not fair to Australia’s youth.
High levels of debt shift the burden of paying for services Australian’s enjoy today on to our children and our grandchildren.
It’s the same old Labor – higher spending, higher deficits, despite increased taxes and higher debt. 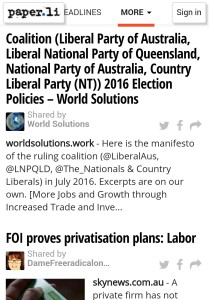