Here are articles on energy, free market, electricity franchise, the environment, et al. Excerpts are on our own.

‘America First’ Energy Plan Challenges Free Market Realities (2/7/2017) | @jeffbradynpr
… “Drilling for oil and gas has picked up remarkably,” he says. In its Feb. 3 “rig count,” the oil field services company Baker Hughes reports the number of drilling rigs operating in the U.S. increased by 17 in just the last week.
“The pick-up is not explained by the current price level but, rather, by the expectation that any investment made now will be profitable because the administration will protect producers,” Verleger says. …

NRG’s David Crane: Where Is the Amazon, Apple and Google of the Utility Sector? (3/27/2014) | @DCCleanEnergy @greentechmedia
… Now we are headed for the same goal, but in the opposite direction: down the path toward a distributed-generation-centric clean energy future featuring individual choice and the empowerment of the American energy consumer.
… As growing lack of confidence in the grid coincides with the introduction of new technologies, businesses and homeowners will realize that there is a better way. And, for them, that means generating most of the electricity they consume on the premises, from their own resources. In this new reality, our “mass” retail electricity franchise, consisting of Reliant, Green Mountain and NRG itself, becomes ever more important.
Our retail focus is on ensuring that we remain a first mover in bringing technological innovation aimed at the home energy consumer to our customers, on terms that they find attractive. Our marketing relationship with Nest, and their award-winning learning thermostat, is a case in point. But it is only the beginning. We expect to be soon to market with a robust platform offering rooftop solar to homes and businesses and other forms of sustainable and clean generation that will offer our customers the ability to dramatically reduce their dependence on system power from the centralized grid.
And for the customer, business or individual who simply wants nothing to do with the grid, the centralized control it represents and the inhibition of individual choice and restriction of personal freedom that is implicit in being “inter-tied” to the grid, there is the post-grid future — a future that is driven by renewables, incorporating both energy storage and sophisticated localized automation to balance production and load.
There will be systems that harness thermal and electric synergies and across not only clean energy, but also fresh water production, waste disposal and electrified transportation to create a virtuous circle of civil sustainability. We are just getting started in this area with, among other projects, our groundbreaking Necker Island announcement, but we expect to be a leader in the area of renewables-driven ecosystems. … 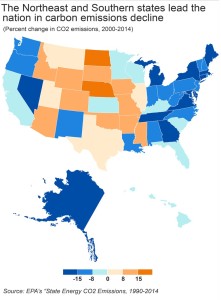 …@jimtankersley labeled “high-output” and “low-output” America.
…@RonBrownstein @TheAtlantic…
…the extremely tight alignment between states’ emissions and politics preferences. This alignment shows how very strongly economic self-interest shapes and reinforces ideology.
… The alignment is sharp: All 22 of the states that emitted the most energy-related carbon per capita voted for Trump over Clinton last month, including, in order, Wyoming, North Dakota, West Virginia, Alaska, Louisiana, Montana, Kentucky, Indiana, Nebraska, Oklahoma, Iowa, Texas, and Alabama. Overall, Trump carried 27 of the 32 states that emit the most energy-related carbon per capita. …
… Hillary Clinton carried all eight of the states (plus the District of Columbia) that emit the least energy-related carbon and 16 of the lowest-emitting 19, with the exceptions of Florida, North Carolina, and Idaho. Along these lines, while Trump carried nearly all of the most fossil fuel oriented states, Clinton carried nearly all of the lowest-carbon states, ranging from New York, California, Vermont, Massachusetts, and Oregon to Maryland, Washington, and Virginia.
ZU… Notice that some of the states that are seeing emissions decline the fastest (darkest shades) include not just classic low-carbon blue states such as Massachusetts and New York but key Trump provinces such as Georgia and Tennessee, closely followed by other Trump states such as Alabama, Indiana, North Carolina, and Pennsylvania. It’s also worth noting the strong growth of renewables in such Midwestern red states as Iowa, Kansas, South Dakota, Idaho, Oklahoma, and Texas which also augurs for change.

Five charts that show why Trump can’t deliver on his coal promises (12/6/2016) | Devashree Saha @BrookingsMetro
… Coal production has plummeted to levels not seen since the early 1980s. The average number of employees at coal mines has decreased 12 percent to 66,000 employees, the fewest since 1978. And, the industry has been plagued by a series of bankruptcies. …
… The utility industry, motivated by profit and a desire to keep costs low, has been shifting significantly from coal to natural gas. In 2000, coal accounted for 51.7 percent of electricity generation, compared with just 15.8 percent for natural gas. By 2015, coal’s share had dropped to 33.2 percent, while natural gas rose to 32.7 percent of total generation. The Energy Information Administration predicted in March that natural gas’ share of the electricity market would surpass coal for the first time in 2016…
… The cost to build a utility-scale solar photovoltaic plant has fallen by about 80 percent since 2009, while wind project costs have dropped by 60 percent. As a result, large solar and wind farms can compete in the power market even with low natural gas prices. The entry of renewable energy projects into the market is leading to a reduction in coal-fired generation in many places, including deep red states. For instance, Iowa and Kansas get 30 percent and 21 percent of their electricity from wind, respectively, and Texas has added more wind-based generating capacity than any other state. …
… Coal exports fell for the third consecutive year in 2015, ending the year…more than 50 MMst less than the record volume exported in 2012. …

Could America’s smallest state lead the way toward the next energy age? (10/13/2016) | @timmonsroberts @BrookingsInst #PlanetPolicy