Here is a part of information on the Dutch general election 2017. Excerpts are on our own.

The House of Representatives (The Second Chamber) – 150 members; proportional representation 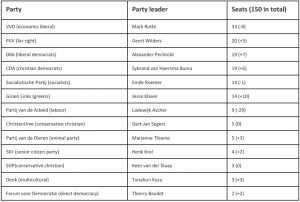 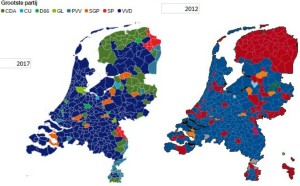 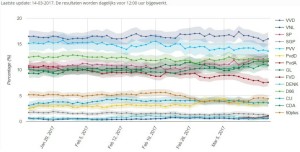 One image perfectly captures why populists didn’t win the Dutch election (3/16/2017) | @aamnamohdin @qz
…unlike in the US and Britain, the Netherlands is not a winner-takes-all system. …

What future for the Netherlands: do Dutch brace for more political instability? (3/7/2017) | @VoteWatchEurope 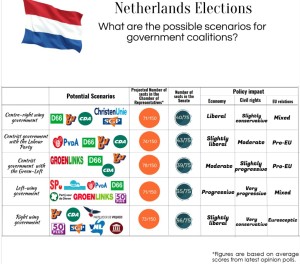 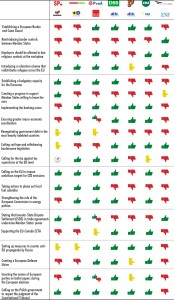 THE NETHERLANDS – EARLY PARLIAMENTARY ELECTIONS – 9 June 2010 (PDF; 3/29-31/2010) | @OSCE
Page: 3
A. BACKGROUND AND POLITICAL CONTEXT
The Kingdom of Netherlands is a constitutional monarchy with a parliamentary system of government. It consists of 12 provinces, the Netherlands Antilles and Aruba. The Netherlands, the Netherlands Antilles and Aruba conduct their internal affairs autonomously and pursue their common interests on a basis of equality. The Head of State is Queen Beatrix, in power since 1980. The Netherlands, Netherlands Antilles and Aruba elect their own independent parliaments and have their own executive branches.
The parliament of the Netherlands (Staten Generaal) is bicameral with a first chamber (Eerste Kamer) comprising of 75 members indirectly elected by 12 provincial assemblies and a second chamber (Tweede Kamer) consisting of 150 members directly elected for a four-year term. The executive branch of government is formed by the Council of
Ministers, headed by the Prime Minister. The Council of Ministers is appointed and dismissed by the monarch.
Page: 5
C. ELECTORAL AND VOTING SYSTEM
Members of the second chamber of parliament are elected through a proportional list system in a single nationwide constituency without a legal threshold. The Netherlands is divided into 19 electoral districts for administration of the elections only; all votes cast for candidates in each district are combined during the tabulation of results. However, the system provides for preferential voting, as each voter votes for a particular candidate. It is only through the candidate chosen that a vote is attributed to the respective electoral list.
The number of seats allocated to each candidate list is determined by dividing the total number of votes cast by 150 (number of mandates in the second chamber of parliament) to determine the electoral quota. Once the allocation of seats to parties has been determined, the names of the elected candidates are specified in accordance with the numbers of votes cast for each candidate. This procedure begins from the top of the list and moves down until the party’s entitlement to seats is filled. However, a candidate who obtains at least 25 per cent of the electoral quota is declared elected automatically regardless of his or her number on the list.
D. ELECTION ADMINISTRATION
Elections in the Netherlands are administered by a three-tiered, decentralized structure. This includes the Electoral Council (EC), 19 Principal Electoral Committees (PEC), and some 10,000 Electoral Committees which act as polling stations. The MoIKR and municipal executives also play an important role in the organization of an election. The second chamber of parliament is responsible to certify its own final results.
Page: 6
The 431 individual municipalities each have at least one electoral committee. The approximately 10,000 electoral committees consist of a chair and between two and six members, together with sufficient number of alternates. Electoral committees are not permanent bodies and are appointed by the municipal executive. They are responsible for
carrying out the election on election day.
The MoIKR oversees the overall conduct of elections at national level. It establishes the regulations and appoints the 19 PEC members for parliamentary elections, the 431 mayors and the heads of local government administration. At a local level municipal executives are responsible for administering elections, for maintaining computerized voter registers, and for distributing voter registration cards. The municipal executive also decides the location of polling stations and compiles all the results for the municipality. 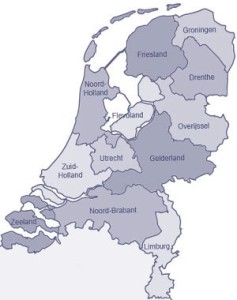