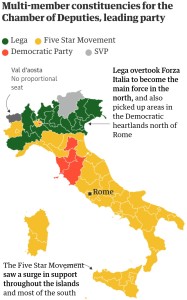 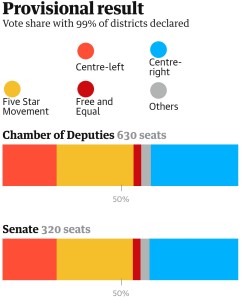 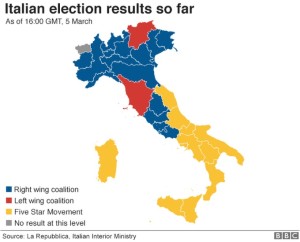 Italian elections 2018 – full results: Italy yesterday went to the polls to choose over 900 members of its two houses of parliament. Former prime minsters Silvio Berlusconi and Matteo Renzi were the big losers as voters opted for anti-establishment parties (05/03/2018) | @guardian
Italy election: Populist Five Star and League vie for power (05/03/2018) | @BBC
How to watch the Italian election like a pro (03/05/2018) | EMMA ANDERSON & JACOPO BARIGAZZI @POLITICOEurope
The incredibly complex Italian election is today ? here’s a simplified version of what you need to know (03/04/2018) | Will Martin @businessinsider
The Impossibility of Italian Politics (03/07/2018) | JOHN LLOYD @aminterest
Italy election to result in hung parliament: Former PM Matteo Renzi will reportedly resign as head of the ruling center-left Democratic Party after a crushing election defeat. Silvio Berlusconi’s right-wing coalition took the lead but may face a hung parliament. (05/03/2018) | @dw_politics
Italy headed for hung parliament as anti-establishment 5-Star Movement projected top vote-getter: According to early projections, none of Italy’s 3 main blocs or groups can govern alone (03/04/2018) | @reuters @CBC
Italy election: what we know so far about who could form a government (03/06/2018) | Daniele Albertazzi @ConversationUK
Let the Populists Try to Govern Italy: An anti-establishment government would finally put the League and the Five Star Movement to the test. (03/09/2018) | Ferdinando Giugliano @bpolitics
After Italy’s Election, 2 Rival Populist Parties Claim Right To Lead Next Government (03/05/2018) | Sylvia Poggioli @nprpolitics
Victory for Eurosceptic, populist parties shocks the establishment in Italy election (03/05/2018) | Nick Squires & Peter Foster @Telegraph
Italy elections deliver stalemate, Silvio Berlusconi and maverick Five Star advance (03/05/2018) | @reuters @ABCnews
Italian general election ? when are the results out? (03/04/2018) | Sara Sjolin @MarketWatch
Italy’s Election Is A Blow To European Unity And A Boost For The Far Right: Anti-establishment and anti-immigrant parties made serious gains, throwing the country into political uncertainty. (03/05/2018) | Nick Robins-Early @HuffPostPol
Italy election: Populist parties claim right to govern after poll stalemate – A right-wing coalition is set to win the most votes overall, with the populist 5-Star Movement the biggest single party. (03/05/2018) | @SkyNews
ANTI-IMMIGRANT POPULISTS JUST CLEANED UP IN ITALY’S ELECTION (03/05/2018) | Tim Hume @vicenews
Italy election: Italy goes to the polls: ITALIAN voters have delivered a hung parliament, meaning none of the country’s three main blocs or groups can rule alone, after a topless protester left Silvio Berlusconi with a clear message. (03/05/2018) | @AP @newscomauHQ
Riding wave of anger over jobs and immigration, Italian voters line up behind populist parties (03/05/2018) | Tom Kington @latimes
Italy election: Exit poll gives edge to center-right coalition (03/04/2018) | John Bacon @USATODAY
Italy’s election should be a wake up call for the EU: The EU can turn the victory of the populist Five Star Movement into an opportunity for dialogue and transformation. (03/08/2018) | Silvia Mazzini @AlJazeera
Italy election: What was the result and what is the Five Star Movement?: Nation faces political standstill after voters deliver hung parliament as support for anti-establishment party soars (06/03/2018) | Samuel Osborne @Independent
Election projections point to euroskeptic shift in Italy (03/04/2018) | FRANCES D’EMILIO & COLLEEN BARRY @AP @ABC
What the Italian election can tell us about the United States: Elections are the first step. What we care about is who is in and who is out of the government. (03/02/2018) | Hans Noel @vox
Italy heads to polls in election overshadowed by populism: Italians began voting on Sunday in one of the country’s most uncertain elections ever, with far-right and populist parties expected to make major gains and Silvio Berlusconi set to play a leading role. (03/04/2018) | @France24_en
Revolution at the polls: How Italy made Steve Bannon’s “ultimate dream” come true (03/06/2018) | Annalisa Merelli @qz 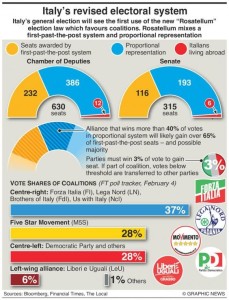 #ItalianElections are scheduled Sunday. I run a few simulations based on opinion polls and relative territorial strength of parties. The interactive visualisation of the results from the simulation (with some background information is available here: https://t.co/jbNWrG0ufb). pic.twitter.com/3qIclZosMO

Vote share of each coalition in Italian regions, 2018 election. pic.twitter.com/GtBqI1SLLr

Italian election leaves science out in the cold: Researchers hold out little hope that the next government will improve their underfunded research system. (23/02/2018) | Alison Abbott @nature

If you think the populist revolution is finished, think again. It has only just started, says Rod Liddle: https://t.co/igsplWjPPO

.@RachelDonadio takes stock of the implosion of Italy's ruling parties—and the uncertainty ahead: https://t.co/z5XFeggYyk pic.twitter.com/qLjppJ5U5I

#Italy’s election results yet another vindication of @davidfrum’s view in @TheAtlantic that ‘When liberals insist that only fascists will defend borders, then voters will hire fascists to do the job liberals won’t do’. https://t.co/uvvVfawNRS @zmkc

Will Italy's Catholic populists see themselves reflected more in Trump than in their own pope? asks @annamomi https://t.co/Y0TTdU39v3 pic.twitter.com/520qo5AsEw

What happened in Italy on Sunday and what will happen now? https://t.co/mYN5GsZu2r pic.twitter.com/5XunW6cNI2

Italy’s election wasn’t just a populist takeover – it was also about the demise of the left https://t.co/aXP2FJ7dWq pic.twitter.com/KrGockQHms

Our most read article from the Italian election campaign: Has immigration really led to an increase in crime in Italy? https://t.co/eiyUpedx7z

Evidence from France and Italy: Do governments use EU funds to help buy votes in elections? https://t.co/Yxj71dDfKm pic.twitter.com/HVkixoLxLD

Italy’s election: Assessing where the parties stand on the key issues https://t.co/ZUVvsCSXvE

When Europe is fashionable: The strange paradox of the Italian elections https://t.co/22BuvC6J45

Why immigration has the potential to upend the Italian election https://t.co/WwhKfhpgxk

Silvio is back: Understanding Berlusconi’s latest revival ahead of the Italian general election https://t.co/VKZXVC07B8

Italian voters again expressed their preference for the Five Star Movement (M5S) in last weekend’s general election. Where does this support comes from and what does the M5S asks Giannino in this new article on OxPol. https://t.co/VXEx6Q4ZwH

On Election day, it will be revealed if Italian voters will pave the way for a grand Berlusconi comeback to the political stage. In this article, Giannino analyses the likely outcomes of Italy's March election:https://t.co/lxfkls7GGu

What does a hung parliament mean for Italy and the European UNion? https://t.co/MJZlgX73cX @guardian

The populist surge is revived in Italy as former fringe parties secure half of the seats https://t.co/9XIZkQKWD0 @politico

The Italian Election 2018: Who are the contending parties and what do they stand for? https://t.co/MPQYYTO92g @TheLocalItaly

A decade on from the Euro-zone crisis and Italy's GDP_ has yet to recover. How will the economy impact the general election on Sunday? https://t.co/XXTSl1lBzy @washingtonpost

'The French think of Italy either when they have problems with Germany, or when Italy has an election that could spell trouble,' https://t.co/D3YaK8VoU5 @politico

Big factors in Italy election were weak economy/high immigration and feeling EU not helping – long coalition talks now likely – could end up with national unity govt and new elections in a year’s time: listen back to @LScazzieri on @talkRadio (2.22pm+) https://t.co/sI4TL5wdUZ

My reaction to #ItalyElection2018 for @Telegraph: Italy's future now depends on how the Five Star Movement resolves its internal contradictions https://t.co/RwHzhquD0P @CER_EU

Publicly available seat projections for #Italianelections, as recalculated by @EurasiaGroup (for all plausible coalition options). Hung parliament likely but a majority may be close at hand. #rosatellum #politiche2018 pic.twitter.com/r8I7Ticl6s

"those who write Berlusconi off as irrelevant … are likely to be proven wrong yet again, as they have been many times in the past". This article of mine from 2014 is ageing well – not necessarily a good thing, I know https://t.co/9nD7dVIkJ4 via @LSEEuroppblog

A majority of Italian voters backed Euroskeptic and anti-immigrant parties in a general election, with early vote tallies pointing to a hung parliament: https://t.co/v3zzVuJS8z pic.twitter.com/IZAo8NuvAD

Here's what to know about today's #ItalyElection2018, which will have repercussions for the Italian economy and the country's role in the EU. https://t.co/GgczYcOKYR

Italy general election vote: Who's who and why it matters https://t.co/loOpD7oSaa

Exit polls in the Italian election point to a hung parliament, with the Five-Star Movement set to be the largest single party https://t.co/5UnXE83p3t

An exit poll has shown the populist 5-Star Movement leading the #ItalianElections but not with a strong enough lead to govern alone https://t.co/yhRs02vxy5 pic.twitter.com/D0TX7Szd2G

Why are #Italian voters are so angry? … Real GDP/capita in #Italy today is less than in 1999 #ItalianElections pic.twitter.com/9hHcvf73yb

My dispatch from #Italy's deep south for @vicenews: Ahead of #ItalianElections, the mafia avoids scrutiny as Italy rages over #migrants: https://t.co/Ro8cim6KlU

Whatever the result of Sunday's vote, without an overhaul of the Eurozone architecture Italy will muddle through until the next crisis hits. @ManesWeissk and I for the @monkeycageblog #ItalyElection2018 @EuropeanUni @RobSchuCentre https://t.co/Ag8UvRbkMj

Italy resigns itself to the #euro but risks remain https://t.co/NlQE4ofz1k

5 months ago @Nigel_Farage said italy will leave the EU next.. Hit the nail on the head.. https://t.co/tjOVWpdA1V #italexit #ItalianElections #Italianelections2018

This weekend’s votes in Italy and Germany will determine the fate of eurozone reform – and the loser may be Emmanuel Macron. My latest. https://t.co/BWy5HsVm5y

"Italy lives through a euro-zone impossible trinity: you cannot be in the euro, honour your public debt, and have a broadly stagnant economy." @terzibus quoting @FrancescoPapad1 on #ItalianElections & economy #ElezioniPolitiche2018 #elezioni2018 >> https://t.co/ZIcUUF8Iwt pic.twitter.com/BSwTROmxYW

"Quantitatively, the credit contraction between 2007 and 2009 can account for about a quarter of the observed decline in Italian total factor productivity growth." Read @SMerler 's blog on the so called "productivity puzzle" #competitiveness #Italy >>https://t.co/sHHrrrBHdd pic.twitter.com/M1LJopcE13

"Italy lives through a euro-zone impossible trinity: you cannot be in the euro, honour your public debt, and have a broadly stagnant economy." @terzibus quoting @FrancescoPapad1 on #ItalianElections & economy #ElezioniPolitiche2018 #elezioni2018 >> https://t.co/6eviWFa1AF pic.twitter.com/x0MAQ3Xr9r