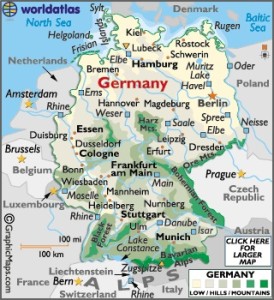 Opinion: Germany's government needs to 'win back lost trust'.
The country's president has seen off the new government with words of caution, says DW's @Strack_C https://t.co/XNn3CaYKga

The best moments of the old and new chancellor's swearing-in.#Kanzlerwahl pic.twitter.com/K6yqlBbd8M

How is #Merkel depicted in art?

Angela Merkel has been sworn in as Germany's chancellor for the fourth time. Before she appears in the chancellors' gallery of portraits, here's how other iconic works of art have already portrayed her: https://t.co/lXome9BhtA via @dw_culture pic.twitter.com/9jkklSVIoj

With #Merkel in for a fourth term as German chancellor, the far-right AfD's @Alice_Weidel says it's a "dark day" for Germany. Despite her English skills, the former chancellor candidate refuses to speak anything but German. @MKuefner asks why: pic.twitter.com/iM9CUUZNO8

The designated Minister of Justice @katarinabarley says the government wants to strengthen the social aspects within the EU – together with France's President Macron. pic.twitter.com/ZiFgsrYhnw

Who is Germany's new foreign minister, and what is he like? Our profile of @heikomaas https://t.co/OztLPPWrsE pic.twitter.com/OY09NaCR7b

Here we go: After 66 percent of SPD members voted "yes", Germany will have another Merkel-led government soon. If you want to know what makes her likely finance minister tick, read our profile of Olaf Scholz here https://t.co/6gDA4VnQrv #eurozone pic.twitter.com/IoWQQbCXsb

In an interview with @CNBC, GMF President Karen Donfried explains that U.S. President Donald Trump's implementation of steel and aluminium import was "foreshadowed." Listen to the full interview below. #BrusselsForum https://t.co/FBf9IrRWBf

"You can not stop #globalization. What you can do is that you can try to shape it." –@MalmstromEU. Hear full remarks here: https://t.co/wwTO8mG5MU pic.twitter.com/jRIRNHhQDq

GPSG co-convenor Josefin Graef on the struggle to form a new #Groko and #Brexit. https://t.co/pD91y8AMMM

New study by @mat_fal (FIPU) & @VerenaStern about last year's elections in Austria, Germany and the Czech Republic and their impact on European
migration policies #MigrationEU https://t.co/AhNRnC8ghs

East #Germany left without a seat in new cabinet. @holtemoeller: "The fact that state premiers from the east are asking about this shows that the new #coalition has not been successful in this area" via @HandelsblattGE #GroKohttps://t.co/zUlEJjA5W4 pic.twitter.com/4UhBfT1OnV

A new #REP by #RWI sheds light on the question: Is my #rental price overestimated? It develops a #RealEstate #index based on #apartment offer prices on the post code level for #Germany. https://t.co/YvuvcgrtEX pic.twitter.com/DhiDHWRwGK

A new #REP by #RWI finds that increasing #nursing staffing levels by 10% in #Germany reduces the #mortality rate by 0.05% & increases #patient satisfaction by around 0.7%, on average. #Hospitals #quality https://t.co/EefbTwhWIb pic.twitter.com/zlqFmFqsZs

Is #GER crime-riddled due to #refugeemigration, as @realDonaldTrump puts it? A new #REP by #RWI sheds light on this controversial issue: there was no overall increase in crime rate caused by asylum seekers but recognized refugees commit more thefts & fraud https://t.co/LF4y45PsxI pic.twitter.com/ESJtuEKPIa

German #wages, the #Phillips #curve and #migration in the #EuroArea. @GuntramWolff explaining 4 reasons why announcing the death of the Phillips curve – the relationship between #unemployment and #WageGrowth – is premature in #Germany. https://t.co/NtZ675LHfA pic.twitter.com/5hEA7WmgDF

Listen to the podcast of our event Hard Brexit, Soft Brexit, No Brexit?, co-hosted with Konrad Adenauer Stiftung, for a German view of Brexit: https://t.co/yOgovVzlu9 pic.twitter.com/QvAaQGF9Va

Germany's AfD is an example of the populist radical right, which is distinct from earlier forms of extremist and explicitly fascist parties. https://t.co/Gcdsquz35f

Franco-German cooperation: A compromise between vision and reality? https://t.co/8vCv65aSKn

NoGroKo? How the new generation of CDU and SPD members are seeking to reshape German politics https://t.co/8y5E9EzquJ

Why the left loses: Explaining the decline of centre-left parties https://t.co/leCyGI1rmt

The 2017 federal election was a potential turning point in German politics https://t.co/gfkA1g0TDu

Germany’s grand coalition talks give hope to refugees who want to reunite with their families https://t.co/qIVtGbAr35

German consensus politics must adapt to the adversarial approach of the #AfD https://t.co/hmPaCcqMrv via @LSEEuroppblog

#France, #Germany and the #EU: The European Motor Sputters to Life https://t.co/do8nYiMjD7 via @SPIEGELONLINE

Far right politics in #Germany: From fascism to populism? https://t.co/kMEaDAjXBF Interesting, though the #AfD is currently overshooting this trajectory @LSEEuroppblog

This one has aged rather well: @LSEEuroppblog – Look ahead to 2017: The #German federal election #AfD https://t.co/oRKlObaAPZ

"A vote for the far right is a sort of vengeance for being betrayed." Does the new coalition in Germany offer centrist stability or fan the populist flame? https://t.co/odkHQdFBdD @nytimes

What's a median legislator and why could he/she be key for #AngelaMerkel ? Dr Tom Quinn @uniessexgovt
writes for @ConversationUK https://t.co/ytfQx3l26m

Research from #Germany argue the burden of #CorporateTax borne by labour is vary across different groups of employees. Young, unskilled employees, workers with high job tenure & those in capital-intensive sectors are predominantly affected. https://t.co/gHVfaqrUT3 #inequality

#election in #Germany: economic reforms will have low priority for the next government, says @MFratzscher https://t.co/4Q145kXyZI #btw2017

Statement of DIW president @MFratzscher about the ramifications of the German federal election 2017 #vlog #Election2017 https://t.co/U9gvUsNvwp

Fact #4: poverty risk in Germany has increased strongly, also since 2005, esp. for single parents, is higher than in EU. #in #inequality pic.twitter.com/igK1ckVTQn

Fact #2: atypical employment in Germany has risen for people with low income, and has fallen for those with high income. #in #inequality pic.twitter.com/f2EJw5QvA7

Fact #1 on #inequality in Germany: The middle class is shrinking, independent of narrow or wide definition. #in pic.twitter.com/asSd0BW2yU

German lawsuits against #ECB QE lack merit, but could cause damage and polarize German election debate. My take: https://t.co/yAEgP9wQgB #in

In almost every European country, the capital contributes strongly to the countries’ economy. However, there is one exemption: Germany. Without Berlin, the German GDP per capita would be even higher. https://t.co/TglBlcqeNA