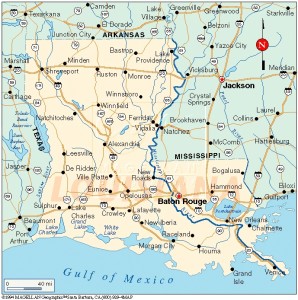 #OTD in 1812, Louisiana joined the Union as the 18th state. 1st of 2 states added during Madison’s presidency. https://t.co/IrJVyoUOiu pic.twitter.com/vMtp6xDnyk

#OTD
215 years ago, France ceded the colony of Louisiana to the USA for what worth at the time $15M. By this treaty, young American nation doubled its area and extended towards West. This sale marked the end of French colonization in Louisiana and left important cultural heritage pic.twitter.com/a1Ngd1rLFO

The Louisiana Purchase Treaty was signed 215 years ago #OTD, April 30, 1803, doubling the size of the United States. French exchange copy of the Agreement to Pay France for the Louisiana Purchase, signed by Napoleon Bonaparte: https://t.co/VhMR3nOLZa pic.twitter.com/Ewfe7eWxcd

Hey #HistoryTeachers! #OTD in 1803, the #Louisiana Purchase was signed. Teach your middle school students about the Louisiana Purchase using #population density maps of the U.S. from the 1800s: https://t.co/EAH5KD5TdJ #StatsInSchools pic.twitter.com/zLsbCIKcKA

Letter From U.S. Conference of Mayors President, New Orleans Mayor Mitch Landrieu to the Nation’s May… https://t.co/bzlvXfXGvb via @usmayors

Hear the story of Tulane University and New Orleans working together to get through the crisis of Hurricane Katrina https://t.co/yRBUyDqj0a pic.twitter.com/2tm726EKU6

A year ago, Shreveport, Louisiana was on the brink of building a highway through a poor inner-city neighborhood. Strong Towns helped fight back. https://t.co/TTFUhEMlOx