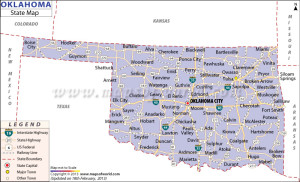 Congrats to @OklahomaOMES on being profiled by Microsoft for their innovative use of Skype, Azure and Office 365 for IT consolidation. https://t.co/tZyS0vRZfu

"We could not be happier to be joining this cost-effective business environment and family-friendly community.” – Eric DeMarco, President and CEO of Kratos Defense & Security Solutions

Check out where @StittforGov won the gubernatorial race tonight. The redder it gets, the more support for Stitt. The bluer is Edmondson. You can see a live, updating map at this @tulsaworld link. https://t.co/LONwhqiYXH pic.twitter.com/0NcEmn9thj

With almost all precincts reporting, only one of five state questions pass https://t.co/JCfjaILq8b via @tulsaworld

NEW: In a rare rebuke of Warren, @CherokeeNation says, "Using a DNA test to lay claim to any connection to the Cherokee Nation or any tribal nation, even vaguely, is inappropriate and wrong." The tribe, whose chief is a Democrat, usually avoids the topic. https://t.co/l2ScaBS6h5

Y'all never seen a panhandle till you have seen the panhandle of Oklahoma. https://t.co/8lhUre3r1d @OK_Creativity @OklahomaToday

Crews have welded the last rail for the @Maps3 @OKCStreetcar downtown. It marks the end of major street construction for the project, with more testing and other preparation before @EMBARKOK service starts later this year. #ComingRailSoon pic.twitter.com/ouU2GU9FDW

And as the story also discusses, and the picture documents, we’re doing something about it. #1OKC https://t.co/BMaI1Q89Tn

Here’s my ESPN the Mag cover story on Paul George sticking with OKC, and the partnership with Russell Westbrook that sealed the deal: https://t.co/OiAMrEHhTk

Proud and excited about our city! https://t.co/PcKCWkdZyY

This is a big deal. Eight-story condo tower planned for Midtown https://t.co/MktgAACNOh via @newsok

.@bonappetit released their list of the 10 best restaurants in America, putting Oklahoma City's @nonesuchokc at number one. https://t.co/1TJqoNVefU

With our Fall events behind us, we’re kicking it into high gear for #DowntowninDecember! Thanks @_davemorris and @NewsOK for having us on to chat about all the upcoming holiday happenings! https://t.co/eZQEbCgFIV

With national retailers and unique boutiques along with a delicious selection of dining options, you'll soon discover why it's so easy to enjoy an entire day in @ClassenCurve! #SeeOKC https://t.co/xUZgXTY5of

“The ground is just moving under our feet so rapidly and in such a complex way that there isn’t a well established doctrine for practicing this kind of law.” — J. Blake Johnson, @Crowe_Dunlevy https://t.co/VesyyHUU5c

As OKC readies itself for the launch of the streetcars, now is probably a good time to familiarize yourself with how they'll work: Hours of operation, stops, pricing, safety, and more!
Catch up with the latest on @EMBARKOK @OKCStreetcar on #VeloCityOKChttps://t.co/aUkUjIJ79v pic.twitter.com/I4PQsGwVH7

Political science professor Dr. Richard Johnson was interviewed for a story in The Oklahoman about state political campaign spending. https://t.co/Eqz3YbcMU8

Night Sprints at our Head of the Oklahoma Regatta! pic.twitter.com/zKHBLtiBzR

The Draft Berryhill Land Use Plan is now available for review. You can review the plan and provide your feedback on six recommendations. https://t.co/tXgGFlJdDP#Tulsa #FeedbackTulsa #Berryhill pic.twitter.com/gAQjGKjDwk

City Councilors and Mayor G.T. Bynum met last month for a retreat to discuss the future of the City of Tulsa Parks system. Here's a recap: https://t.co/2YavB3pRnf

In May, @cityoftulsagov won our #EngagedCities Award for its Urban Data Pioneers program, which brought residents into city hall to help analyze data and craft better policy. Interested in how they did it? Read the blueprint here https://t.co/pLqQqxVrjw

During an era of political polarization, @cityoftulsagov Mayor @gtbynum is using #data-driven #outcomes to break down historic lines of division. Watch his inspiring @TEDx talk here to learn how a focus on #solutions can unite communities & drive change. https://t.co/klj4Q8KYC9

BurnCo BBQ has made a TON of fans in the past few years. Their BBQ Brunch at Cain's Ballroom is turning heads and fixing that BBQ weekend craving in a historic venue with live music! https://t.co/LU8VbsViva

We've upgraded! Go check out our newly-designed website! Many thanks to @TeamSaffire for a gorgeous, user-friendly layout! https://t.co/rcWq5va1f0 #TulsaPAC pic.twitter.com/RkZmwHDVIG

With Gathering Place, a $465 million park in Tulsa, a star designer and a powerful philanthropist are challenging what an urban park can be
https://t.co/mFPlnx81BX

More proof that Tulsa is a delicious, delicious city. Thanks, @TulsaWorld!

We’re in the height of tomato season here in Oklahoma!
This simple, elegant recipe showcases the deliciousness of summer! @SpoonForkBacon https://t.co/PUDFX2M8DS

Should doctors be asked to report to health insurers when patients aren’t following their treatment plans? That is the topic of TU Law professor Matt Lamkin's article in the New England Journal of Medicine. #TULaw #utulsa https://t.co/zDOYypR6Bl pic.twitter.com/iXdOa93V5w

Did you miss the Topping Out Ceremony at Norman Public Library Central on Wed.? Check out the drone video https://t.co/GYtaeibsYO (Thank you, Flintco, LLC for the cool video!)

Per @normanokpd FEMA in coordination with the FCC will conduct a nationwide test of the Wireless Emergency Alerts (WEA) and Emergency Alert System (EAS) today at 1:18PM CT. You will likely receive the message on your cell phone. Learn more here: https://t.co/F4hqGAEGM5 pic.twitter.com/38HFzhWDGS

"At first glance, it could pass as one of the gift shops or boutique clothing stores that dot the downtown area. Closer inspection reveals it is a quaint, new Italian restaurant, Cheri Ann's Trattoria."@RoseDistrict @BrokenArrowCVB https://t.co/yJCanFYLvh

Travel with the BA Chamber to Venice, Croatia and Slovenia this Fall! https://t.co/lvrZ0Glhsp pic.twitter.com/bHPqZGGSpy

Want to catch up on the latest OKFB news? Make sure to read the latest issue of #Perspective, which features the #2018FarmBill, August Area Meeting dates, a new member benefit and much more! Read it online here: https://t.co/sA3RwSz33n

We are working with Advanced Animal Diagnostics to identify calves that need to receive antibiotic treatment before visual signs of BRD are detected. This research should help improve antibiotic stewardship and improve the diagnosis and treatment of BRD. pic.twitter.com/Cya7xYe13r

Lots of great info in today's Farm and Ranch News- We preview the 66th Annual Convention of @OkCattlemen, look at the Latest Drought Monitor, Introduce you to Alex Ott- the new Top Hired Hand at the @AmericanPecan and More! Take the Link and Check It Out! https://t.co/JQ1r3dfFrN pic.twitter.com/QnnqSFlIlc

Ham on your holiday menu (say yes!)? Here are 10 amazing Christmas ham recipes for you to choose from. https://t.co/sjSe0qNqFQ #holidayham#hamrecipes#holidaymeals#holidaymealideas

New review! Do you like Irish food and Irish music and an Irish pub but you accidentally live in Oklahoma? Visit @PubSean, where modern traditional cooking means even the blood sausage tastes good.
Thanks to @Okpork for sponsoring this #PigOutOK post! https://t.co/4LtcL0anY2

Earthquakes in Oklahoma are up about 13,000% in the past decade. The spike coincides with an increase in oil and gas development—more specifically, fracking. Current state laws won’t do much to prevent further damage. https://t.co/rMDTNPuLQn pic.twitter.com/ChC1yMQbZ2

"We’re getting support from teachers all over—Alaska, New Mexico, Oklahoma. … These places are saying, 'We know that if they’ve done it in West Virginia, we can do it here, too.'" https://t.co/JhPiusb9Yf