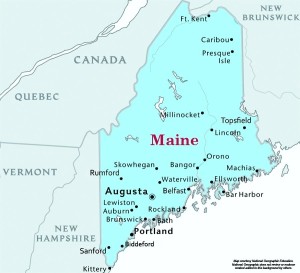 #OTD in 1820, Maine was admitted as the 23rd state. 4th of 5 states added during Monroe’s presidency. https://t.co/pMxA0oTUM7 pic.twitter.com/sjBGlZt3dz

The Missouri Compromise is signed into law by James Monroe #OTD 3/6/1820. It allows Missouri to enter the Union as a slave state, brings Maine into the Union as a free state, and makes the rest of the northern part of the Louisiana Purchase slavery-free.https://t.co/Jj0I2lUGbh

The Maine Bicentennial Commission is working on plans for commemoration of Maine's 200 years of statehood in 2020. This is an account you'll want to follow to stay up to date on the plans for this big anniversary. @OfficialME200 https://t.co/gL73WLlEZu

In #Kennebunk stands as a shining example of #FederalArchitecture — and an early precursor to today’s #MillennialPink trend. Learn more about the 1806 residence that was built for a prominent lawyer who helped #Maine achieve statehood. ➡️ https://t.co/WWlWMf3iTm #MaineHomes pic.twitter.com/reA4Hkkenz

If you missed our Feb. 26 webinar with @MESecOfState, you can watch the recording now at https://t.co/nOQJRXiv8I!

Annual St. Patrick's Day parade is this Sunday, March 17 at 12:00 PM along Commercial Street. Commercial will be closed around 11:45 am from Center St to Franklin St for approx 1 hour. #portlandme FMI: https://t.co/mHansufagL pic.twitter.com/eth5pAIhWZ

We are so excited for what's next! https://t.co/Nc5Grr4ULR

Congrats to @tanyaemery, Director of Community & Economic Development for @CityofBangorME, on receiving the Leadership & Vision Award at @FUSIONBangor's Annual Extravaganza on Fri 10/19/18.

Thanks to @osbornemedia for the excellent video!

Follow Porter and Sara Fox, Henry David Thoreau and Teddy Roosevelt in a canoe through northern Maine. On the cover of this Sunday's @nytimestravel https://t.co/w27H8h5cCs @visitmaine @wwnorton #northlandbook

Locals Know Best: Get the inside info on culture, food and drink in Portland, Maine https://t.co/e18IN6hhHN

Solve those ordering headaches and restore your confidence knowing that you are getting the most out of your restaurant’s budget. #NativeMaine #NativeME #NewEngland #EatLocal #Restaurant #Produce #Protein #Distributor https://t.co/hSAqv5c8Ij

It is Maine Restaurant Week! We can't wait to dive into all the amazing Portland restaurants. Find out everything that is happening here. https://t.co/aGbA35Ermm

Almost 95% of people in Maine identify as white. Why is the state so white?

The answer has to do with geography, economics, and the state’s history. @MainePublic’s @WillisRArnold answers the question and discusses what it means to even ask. https://t.co/HsEc1dHwm7 pic.twitter.com/BZ41n0jpKm

Interesting read for #Maine on #community value, #OpportunityZones by @bruce_katz Is capital extractive or generative? Is it constricted (focused on narrowly drawn projects) rather than holistic (mixing of residential, retail, employment and amenities)? https://t.co/cSgrQ0fEdU

Check out our new blog about buying local-https://t.co/1nE8DTqp7I #buylocal #smartgrowth

Here's an opportunity! The 1.5 acres on which a mixed-use development would occur is on the southern part of the property and features public infrastructure. @MEREDA2 @CityofWtvl : https://t.co/1w9hjbNXuL

Great discussion with @bruce_katz yesterday as we seek to maximize #OpportunityZones value for Maine communities while identifying investment-worthy projects. https://t.co/5FUT1P1n0n

Fruits on the forest floor: https://t.co/bqyXB39CoO

Maine is trying to root out the invasive Emerald Ash Borer, and it's inviting the public to learn how to help. @MaineDACF will host a workshop on November 15th to help residents look for signs of #EAB. READ ON: https://t.co/Rs1cK13SdU pic.twitter.com/7SD2PyPsou

Explore our new 2018 Annual Report! President Don Perkins said, "We accomplished so much, thanks to the support of our partners & donors. As I reflect on the year, I’m humbled by the magnitude of the issues we’ve taken on, & I’m astounded by our impact." https://t.co/KPJ1TDJkmd pic.twitter.com/h7QpKtgBQt

“Maine’s Rebuilt Scallop Fishery Looks for Another Year of Growth” Now that’s the kind of headline we like to see!https://t.co/R9PDL3YmKE pic.twitter.com/DVaiQ6zPRD

According to data from @NOAA, American #lobster was the most valuable single species harvested in the U.S. in 2015, 2016, and 2017, with #Maine landings accounting for 80% of that value each year. @MaineDMR #mainelobster #mainefisheries #coastaleconomy https://t.co/vYjzbec2TT

A recent study discusses how the cleanup of #BostonHarbor has impacted winter flounder populations and the local marine ecosystem. https://t.co/wiMzVmPzBw

It's time to grab life by the eyeballs and cook a whole fish already. #fishfriday https://t.co/B0QB44gGBj via @HuffPostLife

"Protecting Maine's working waterfront and access for fishermen is important for our business, and our mission of sourcing the highest quality seafood but also critically important for Maine's future." https://t.co/sN7Qm7wfl7

A Maine-based global restaurant group sided with Maine fishermen in their battle with a luxury resort developer https://t.co/nuYLusMfMI via @bangordailynews #workingwaterfront pic.twitter.com/4p2qXSOYkp

DEP’s river and stream upgrade proposal is good for Maine, an OpEd from retired professor and former commissioner of the Maine Department of Inland Fisheries and Wildlife Ray “Bucky” Owen. https://t.co/dd7b3H5vZt

It's important to note that every #recycling program is different (for example, ecomaine DOES take paper coffee cups without the lids!) But this is a good look at recycling, and how/why to go about doing it properly. https://t.co/Mfx0De8tbm #maine #ReduceReuseRecycle

Would replacing wild-caught seafood with plant-based alternatives reduce the environmental impact of our food? Probably not, for a variety of reasons. https://t.co/svMCyH941j

22,000 Mainers rely on Title X for some or all of their health care. The Trump-Pence gag rule puts their care at risk. Read more from our op-ed, published last summer in @PressHerald: https://t.co/Cs8tnMEO9h #mepolitics

As 10,000 Baby Boomers reach retirement age every day, voters in Maine will soon consider the country's first universal home care program. But the proposal, and how it would be funded, are proving controversial. Economics correspondent @PaulSolman has the story. pic.twitter.com/gz0SN3I6mi

Would you move to Maine? Learn more about student debt in the US: https://t.co/9pIIKn8tb2 #economics #strategy pic.twitter.com/uTdpSiLIvk

It’s no surprise that tourism and agriculture are big parts of Maine’s economy. Student researcher Michaela Murray is studying how the wine industry in Maine can support those economies through sustainability efforts. #UMSS19 https://t.co/GhPtDUL663