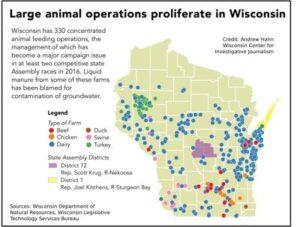 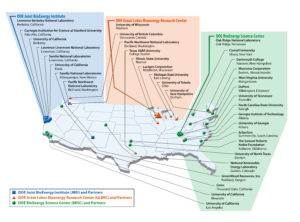 Manitowoc, WI meet Hackensack, NJ, your climate analog of the future. New map tool shows you what your climate could be like in 2080, with and without the #ParisAgreement https://t.co/I7UK53kzhf

3D printing is already useful. But @UWMadisonChem researchers have developed a way to use light to print with two substances at once, which would be a huge boon for crafting complex materials. https://t.co/WG7mTUJBfw pic.twitter.com/xDqgULxYpa

The idea is pretty simple: Ancient people pooped. It ran off into the lake and got trapped there. More people = more poop. And now we can track population and climate change at the same time. Yes, because of 💩. https://t.co/FkhdhVC7Mi

Lakes that freeze today may not tomorrow. Why that means more than just less ice skating.https://t.co/I9Qq1EIjzn

Under some last-minute gift pressure? @WSBresearch’s Evan Polman has some advice: Get a little something for yourself.https://t.co/gqcC3gzxpl

The key to welcoming good development to cities without all that congestion might be building fewer roads — and more transit, pedestrian, and bike facilities instead. https://t.co/uShemLZYxy

To improve how scientists analyze brain images, researchers at the @UWWaismanCenter decided to build a brain.
Or at least, a brain model.https://t.co/DlZl2GQs1I

.@UWMadison physicists are a part of the new work at CERN that discovered an interaction between the Higgs boson and the top quark — the heaviest particle ever discovered. https://t.co/pFPkb1WNqF

“The bobtail squid is special because it has just one bacterium that colonizes in a dedicated organ in the animal, so that allows us to look at the natural processes that occur.” –@markjmandel https://t.co/4s8jk2eJ1i

Pancakes, served with a side of science https://t.co/99AtpNN8kl via @WIRED #PancakeDay

A new way to wind development clock of cardiac muscle cells. “If you want to know how drugs, such as beta blockers, work in the adult heart, it’s better to test those in more mature, human iPSC-derived cardiomyocytes,” says the director of the SCRM Center https://t.co/OscZ2243i6

Seventeen projects, ranging from topics such as electrical stimulation for advanced wound healing to establishing a Radio Astronomy Data Science Center at UW–Madison, have been chosen for Round 5 of the UW2020: WARF Discovery Initiative https://t.co/DTwtzz84t0 pic.twitter.com/ng1WMpSBl0

Congratulations to the 32 members of the University of Wisconsin–Madison faculty have been awarded 2019-20 faculty fellowships. https://t.co/nwkQamPgcl

Since 1998, the UW–Madison Division of the Arts has brought world-class, interdisciplinary artists to campus for semester long residencies funded by the Office of the Provost's Cluster Hire Initiative. The Interdisciplinary Arts Residency https://t.co/Ix0EdIdvfY

Congratulations to the @ehtelescope team on this amazing result! Science at its best. https://t.co/sQqRi9tQEe pic.twitter.com/09WxoZPITs

Check out this article on Jupiter's new moons, and the one "problem child!" This article was written by recent UW alum Erika Carlson, also our former social media coordinator!https://t.co/Geefl38vI7

I love this #MSPaintYourScience trend, and didn't see any astronomers getting in on the fun. So here's the @TheNRAO @VLArray which I use to study neutral hydrogen in other galaxies to understand how they grow and evolve over cosmic time. pic.twitter.com/uZjDl1OwZe

Check out this work by @uwgeoscience prof Stephen Meyers looking at impacts to sea ice and the Antarctic ice sheet:https://t.co/PLpZ0bx35x

“This project is a perfect example of how it’s possible to find engaging ways of connecting diverse audiences to really complex science concepts by tapping into the process of discovery and research,” says Laura Heisler. @Morgridge_inst @WARF_News https://t.co/rOcNpf3aiS

How do you wear multiple hats as a university researcher when working with companies, launching a startup and navigating multiple collaborations? Join us next week for an interactive session with @UWMadison's Andrew Norman. https://t.co/6PgIaxWc8m pic.twitter.com/tgJ5azvgzM

We're excited to see the incredible images of #coolscience from this year's contest. #WisconsinInnovates with @UWMadScience! https://t.co/DndWllQ4d5

A team from @UWMadisonCALS has generated #soybeans with increased resistance to white mold. And, as an added bonus, the plants show greater tolerance to drought. @FabFarmBabe @badgerbean @WISoybean #WisconsinInnovates#UWChangesLives https://t.co/6zCxGkZ0zu

CS Professor Paul Barford featured in @WIRED article "What Happens If Russia Cuts Itself Off from the Internet?" “Because of the complexity across all levels of the protocol stack, there could be catastrophic failures somewhere." https://t.co/Wb2Emuc4ok pic.twitter.com/1FtO9o1lwM

Do you ever make strange food choices when you’re really hungry? #GetPsyched for new research from the University of Sussex in England on hungry snails and #perception! https://t.co/bJqP6IWX60

Need a quick study break? Check out this article from @healthyminds "The Relationship Between Emotions and Alzheimer's" https://t.co/8c2srdw7Em

According to the @APA these are the top #trends in #psychology to watch in 2019. https://t.co/TDZktrvljz

Happy #ElectionDay! Remember to get out and cast your #vote. Check out this article from @Yale on the role of psychology in elections. https://t.co/awgqwkAR3E

How can color communicate messages? Check out this @WIDiscovery article to see what UW researchers like psych professor Karen Schloss found. Want to test it for yourself? Visit @WiSciFest's "What Color Is" event, today through Sunday! #FallFacultyFriday https://t.co/jPkClk5iGl

Almost 40% of Americans are more anxious than they were at this time last year, according to a new American Psychiatric Association (APA) poll, yet few respondents said they sought out mental health care. For campus resources, please visit @UHS_Madisonhttps://t.co/oJG38CVcSY pic.twitter.com/c3qeUXpXX5

Alexa knows all the answers, but this may not really help children learn. "Learning happens happens when a child is challenged," developmental psychologist Justine Cassell says, "by a parent, by another child, a teacher—and they can argue back and forth." https://t.co/cBDQY4QmAY pic.twitter.com/0OTx6zs3Vr

"I think in the not-too-distant future, we could potentially use RNA to ameliorate the effects of Alzheimer's disease or post-traumatic stress disorder," said David Glanzman of @UCLA study in which researchers inject RNA into snails & create memories.https://t.co/5cNbqRxliW pic.twitter.com/MWjAT990HV

We get a bad grade on an exam, we cry. We get into medical school, we cry. How can crying happen in these seemingly opposite scenarios? Check out the current research on tears below. #GetPsychedhttps://t.co/dbIoqmNaTD pic.twitter.com/EoQsnRXDSU

In the past, free time was used to enjoy hobbies or make connections with others. Now this same gap of time is increasingly being filled by screens. Find out the effects in a Ted Talk by Psychologist Adam Alter. #TedTalk #GetPsyched @TEDTalks https://t.co/eE1zx72jwX

Textbooks, get your white-out—Once thought of as pipes, according to UW-Madison neuroscientist Ed Chapman, the brain's fusion pores are actually highly dynamic valves. Check out the rest of his findings here: https://t.co/2m6GZ5wwwQ pic.twitter.com/9BDYawAbRj

Feeling sleepy and unproductive? Psychiatrists Chiara Cirelli and Giulio Tononi have just finished a 4-year research effort that supports their “Synaptic Homeostasis Hypothesis” (SHY) on the effects of a lack of sleep. Read more about their findings at https://t.co/uLjtf28EPW pic.twitter.com/t917oVLoGN

Have any reoccurring dreams lately? Check out this new research on why this phenomenon happens! #GetPsychedhttps://t.co/Z0mKXtfEbi pic.twitter.com/Pciwa6exDI

Researchers, including our colleagues at @UWMadison, have explored how to transform #anxiety and #stress into useful resources that can guide us toward healthy, adaptive decisions and behaviors. https://t.co/zXJi3K7KON @nytimes pic.twitter.com/b1QoOP1Kkh

"From Cheese to Single Synapses: Light Microscopy Across the Disciplines"

As a co-owner and a co-funder (sales tax makes nearly all of us co-funders), Wisconsinites are partners in the discovery.

In part because tobacco has long been grown in WI, tobacco biology & diseases have been the basis for great discoveries in plant science & virology from @UWMadison.
See
Folke Skooghttps://t.co/65LardFs7V
James Johnsonhttps://t.co/ByguveQNPY
Isme Hogganhttps://t.co/xjrNSA7qCH

Anovular or anestrus cows are those females that are not ovulating. Cycling begins within the first few weeks of #calving, says Paul Fricke , a #dairy reproduction specialist with the @UWMadisonCALS. https://t.co/wrNNj2PYlz pic.twitter.com/gZCqZq7daP

Over the next two weeks @WPR will be diving deep into Wisconsin’s complicated relationship with alcohol — from the politics to the human cost to the economic gains — in a special series called “High Tolerance.” https://t.co/kwwOUNLwa7

WGNHS MapSales – counter and online sales – to close at end of this calendar year.
Order your favorite paper publications while supplies last.

DYK? WGNHS has a database of minerals found in WI. This one is Zaratite (with fingers for scale). From the mineral collection of Brigham Young Dept of Geology Courtesy of the USGS Denver Library Photographic Collection (Photo by Andrew Silver)
More at https://t.co/4TK6cPldas pic.twitter.com/lEui33aW2X

"The best science talk for a general audience I have ever heard." Center Founder Richard Davidson comments on @KHayhoe's talk on how to overcome barriers of acting on #climatechange. https://t.co/cvm4sZgouF

Center researcher and social psychologist Pelin Kesebir shares with @WPR the science of hope and the effects it can have on society. https://t.co/QZ49R5OmbV

Among a variety of factors that can influence health, some places in Wisconsin are doing better than others — explore how counties stack up in an interactive graphic from @AppliedPopLab https://t.co/KRUcmYGZOV

In water-rich Wisconsin, the use of groundwater for municipal water systems and agricultural irrigation can lead to conflict https://t.co/nPpoNrfEj5

A comprehensive @WGNHS study found that 40% of private wells in southwest WI are contaminated beyond safe limits. Ken Bradbury discusses next steps with @wispublictv as the Legislature prepares to find solutions during the budgeting process.

Rhubarb plants as a whole aren’t permanently damaged by cold freezes in the spring, but the edible stalks can be altered by freezing weather in a way that is poisonous to humans, says Extension horticulturist Lisa Johnson.

How many of your plants survived the harsh winter temperatures and drying winds? Learn about the causes and cures of "winter burn", as well as what to do with these damaged plants: https://t.co/zbJnGA5JeL

Do you like to play with your food? This “ice cream” is created using a traditional recipe but has almost double the amount of air normal ice creams have, creating a fluffy texture that you can manipulate into knots. If only all food was this fun to play with! pic.twitter.com/thC3WjAyrl

FDA now tests frozen berries for norovirus and hepatitis A. A number of outbreaks have been linked to frozen berries https://t.co/ILD0e9BSd9 #foodsafety pic.twitter.com/kepcfsrgKz

From meat and eggs to leafy greens, four experts weigh in on the safety of the U.S. food supply over the past decade and lay out strategies to improve it https://t.co/F0JZGakCjk #foodsafety pic.twitter.com/DKLc8umBJs

More than 1,300 people have suffered suspected food poisoning in the Mexican state of Veracruz after eating cake https://t.co/Bq71WfnWLQ pic.twitter.com/R0AkQOlVyN

73 lab-confirmed cases of Salmonella Enteritidis — including 2 deaths — in Canada are linked to Celebrate brand frozen profiteroles and eclairs from Thailand https://t.co/o4zpTRYyMm #foodsafety pic.twitter.com/5AnkljfqWh

Targeted prevention measures are needed to address persistent problems with infections linked to certain bacteria and foods, according to an article published in CDC’s Morbidity and Mortality Weekly Report https://t.co/3n7gd6CRTS pic.twitter.com/vyVIV42Aht

FRI's Jeff Sindelar talked to the Washington Post about the meat curing process, and what "uncured" really means https://t.co/q57jqQ2nKG pic.twitter.com/y2zO5cxMkH