"They loved each other and we did not know." There is human suffering on both sides after the war for #NagornoKarabakh. Our latest report from #Azerbaijan for @BBCWorld #BBCNewsTen about the cost of victory. Thanks to the team @Goktay @Clear_red and @StuHollandesq. pic.twitter.com/3iVjOuYQ1r

Burning their homes before the go – a painful exodus for #Armenians in #NagornoKarabakh. Scenes reminiscent of the war in Bosnia. Poignant filmed by @mattgodtv. Within days territory will be returned to control of #Azerbaijan. https://t.co/d3oFIgUzp8

Thousands of protesters in Armenia’s Yerevan are calling for the PM to step down after he signed a deal to end fighting in Nagorno-Karabakh 👇 pic.twitter.com/lgZEYp8qKW

Illegal Armenian settlers in the Kalbajar region in Nagorno-Karabakh burnt down Muslim homes and forestland as they left the area on Friday following the end of the war of liberation conducted by #Azerbaijani forces. #kalbajar #turkey #Armenia #anews pic.twitter.com/p020eHVyFG

Thousands of ethnic Armenians are fleeing areas around Nagorno-Karabakh set to be handed over to Azerbaijanhttps://t.co/eWCcUwoBJl pic.twitter.com/kN88u5nVnZ

Armenians are burning their own homes as the clock ticks down to a handover of territory to Azerbaijan under a Russia-brokered peace deal that followed six weeks of fighting over the enclave of Nagorno-Karabakh and surrounding areas https://t.co/Qp3sTz3SwB pic.twitter.com/EvHkwk2oAM

Yerevan mourns for thousands who died in the #NagornoKarabakh war. pic.twitter.com/2bNNT8pvzj

NEW 🚨 @Nevdon1 writes about how @googlearts is helping Azerbaijan ethnically cleanse the Armenian heritage of Artsakh (Nagorno-Karabakh) by hosting misleading and false information about the monuments in the region: https://t.co/1iHYgNTvy1

Armenians and Azerbaijanis lived side by side when both countries were part of the Soviet Union, but century-old ethnic enmity reignited when communism collapsed | via @nytimes #NagornoKarabakhhttps://t.co/ztiwwLCORY

Armenians burning their homes in Kalbajar before the region returned to #Azerbaijan by November 15, 2020. #NagornoKarabakh #Armenia

"Attention, attention, Armenian forces have entered Kalbajar and northern villages of the Lachin, we allow residents to go, roads are closed, you have no opportunity to escape…"#Azerbaijan #NagornoKarabakh #Armenia pic.twitter.com/lpDwSfpwjZ

We welcome the signing of the Memorandum on the establishment of the Joint Russian-Turkish Center for control over the ceasefire and cessation of all hostilities in the Nagorno-Karabakh conflict zone.
⬇️⬇️⬇️https://t.co/jpcc0OO2xp

"Armenia is David. Why is Israel arming Goliath?"https://t.co/Gx1SWlLcgp

US must reengage in negotiations on Nagorno #Karabakh – Rep. Katherine Clark https://t.co/9hMSUEml4A via @armradio #Artsakh

I am devastated by the unjust terms of the ceasefire agreement forced upon the people of Armenia and Artsakh. We must reengage in negotiations for a lasting and fair settlement through the OSCE Minsk Group that allows all Armenians to safely return home. https://t.co/TzjXZf2Ha9

‘The fact of holding the battlefront before a combined Turkish-Azeri force that also includes battle-hardened mercenaries brought in from northern Syria has only added to the epic dimension of the war in the imagination of Armenians.’https://t.co/287cMFS8NT

I have a long association with, and many great friends in, #Azerbaijan and you'll know they are at war with #Armenia over #NagornoKarabakh. Here's my personal take (a longish read): The people’s war: Why Azerbaijanis want to go home to Karabakh https://t.co/p0wU16fNB0

There are many faces to the #NagornoKarabakh conflict. #Jews in #Azerbaijan gather to pray for the victory of their country's army, loyal because in Azerbaijan they are treated as equals. In #Armenia however, #antisemitism is strongest in the region.https://t.co/PX5yI5SsMb

Armenia and Azerbaijan agreed to a third attempt to establish a cease-fire after four weeks of hostilities, but immediately accused each other of breaching it. https://t.co/IxKmC0U8Kj

MOST READ OF THE WEEK | THE NAGORNO-KARABAKH EXCLUSIVE

In an exclusive interview with Nikkei from Baku, the Azerbaijan president talks war, peace and pipelines.https://t.co/AgMvJA3hpk

Armenia, Azerbaijan Announce They Will Only Agree To Ceasefire That Allows Them To Still Shoot Missiles At Each Other https://t.co/teKAjSyKl9 pic.twitter.com/DB7aCOVXDF

Armenia says it is ready to work for Nagorno-Karabakh ceasefire https://t.co/0EnHzTFB8n

Azerbaijan and Armenia brush off the suggestion of peace talks https://t.co/JvDtYqEyt1

VIDEO Heavy fighting has erupted between Armenia and Azerbaijan over the disputed Nagorny Karabakh region, with civilian deaths reported by both sides pic.twitter.com/BvlQKX0Drf

Long-simmering tensions between Armenia and Azerbaijan appear to have flared up in the contested Nagorno-Karabakh region, with both sides accusing each other of attacking civilians. The neighboring countries have long been at odds over the territory. https://t.co/MuNWvr3EvP

US State Dept finally issues statement condemning #Karabakh fighting late in the day. But US, one of the three mediators, very slow to make its intervention. Pointed reference to "external parties" seems to be directed at Turkey. https://t.co/AgO2G67ebQ

As the war rages on between Armenia and Azerbaijan , here's our take on the same!#armenia #Azerbaijan #ArmeniaVSAzerbaijan #war #armenian #Azeri #syria #turkey #pakistan #India pic.twitter.com/13bcsZ2jCV

Armenia and Azerbaijan have accused each other of initiating deadly clashes that claimed at least 23 lives over a decades-long territorial dispute and threatened to draw in regional powers Russia and Turkey https://t.co/kIK0UYwBBB

Armenia and Azerbaijan accused each other of reigniting their decades-long conflict in the enclave of Nagorno-Karabakh after fresh violence erupted in the breakaway region. https://t.co/psEYghizYX

Casualties mount as battles rage on between Armenia and Azerbaijan over Nagorno-Karabakh region https://t.co/ushfzp5K2c

The death toll in fighting between Armenian and Azerbaijani forces over the disputed separatist region of Nagorno-Karabakh has increased to at least 16, with more than 100 others wounded. Azerbaijan ordered martial law in some parts of the country. https://t.co/DCM7QSfbWR

BREAKING – Armenia declares martial law and widespread mobilization for the age group over 18. This escalation between #Armenia & #Azerbaijan has the possibility of turning into a full-scale war between the two nations. pic.twitter.com/4wGjpILVTh

On the video from #Azerbaijan, possibly, islamist terrorists from #Syria and #Libya, backed by #Turkey. Ilham Aliyev's regime is trying to use terrorists in the war against #Karabakh and #Armenia#ArtsakhStrong pic.twitter.com/VvZGWCN3CZ

#Armenia does not rule out use of new Su-30 jets in event of war https://t.co/KcGqmfUcmM

To Whom That Is Interested To Know, Current Map. #Armenia #RecognizeArtsakh #Armenians pic.twitter.com/UgY95zAnFC 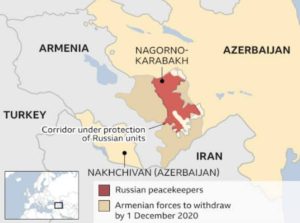 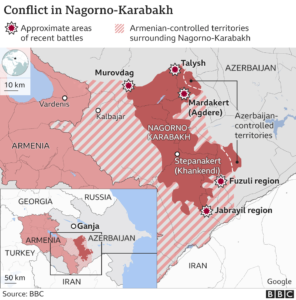