Here are #GOP @realDonaldTrump’s positions (policies). Excerpts are on our own.

CYBERSECURITY
Order an immediate review of all U.S. cyber defenses and vulnerabilities, including critical infrastructure, by a Cyber Review Team of individuals from the military, law enforcement, and the private sector.
– The Cyber Review Team will provide specific recommendations for safeguarding different entities with the best defense technologies tailored to the likely threats, and will followed up regularly at various Federal agencies and departments.
– The Cyber Review Team will establish detailed protocols and mandatory cyber awareness training for all government employees while remaining current on evolving methods of cyber-attack.
Instruct the U.S. Department of Justice to create Joint Task Forces throughout the U.S. to coordinate Federal, State, and local law enforcement responses to cyber threats.
Order the Secretary of Defense and Chairman of the Joint Chiefs of Staff to provide recommendations for enhancing U.S. Cyber Command, with a focus on both offense and defense in the cyber domain.
Develop the offensive cyber capabilities we need to deter attacks by both state and non-state actors and, if necessary, to respond appropriately.

TRADE
Negotiate fair trade deals that create American jobs, increase American wages, and reduce America’s trade deficit.
Donald J. Trump’s 7 Point Plan To Rebuild the American Economy by Fighting for Free Trade
1. Withdraw from the Trans-Pacific Partnership, which has not yet been ratified.
2. Appoint tough and smart trade negotiators to fight on behalf of American workers.
3. Direct the Secretary of Commerce to identify every violation of trade agreements a foreign country is currently using to harm our workers, and also direct all appropriate agencies to use every tool under American and international law to end these abuses.
4. Tell NAFTA partners that we intend to immediately renegotiate the terms of that agreement to get a better deal for our workers. If they don’t agree to a renegotiation, we will submit notice that the U.S. intends to withdraw from the deal. Eliminate Mexico’s one-side backdoor tariff through the VAT and end sweatshops in Mexico that undercut U.S. workers.
5. Instruct the Treasury Secretary to label China a currency manipulator.
6. Instruct the U.S. Trade Representative to bring trade cases against China, both in this country and at the WTO. China’s unfair subsidy behavior is prohibited by the terms of its entrance to the WTO.
7. Use every lawful presidential power to remedy trade disputes if China does not stop its illegal activities, including its theft of American trade secrets – including the application of tariffs consistent with Section 201 and 301 of the Trade Act of 1974 and Section 232 of the Trade Expansion Act of 1962.
KEY ISSUES
America has lost nearly one-third of its manufacturing jobs since NAFTA and 50,000 factories since China joined the World Trade Organization. [@EconomicPolicy]
Our annual trade deficit in goods with Mexico has risen from close to zero in 1993 to almost $60 billion. Our total trade deficit in goods hit nearly $800 billion last year. China is responsible for nearly half of our entire trade deficit. Almost half of our entire manufacturing trade deficit in goods with the world is the result of trade with China.

TAX PLAN
Reduce taxes across-the-board, especially for working and middle-income Americans who will receive a massive tax reduction.
Ensure the rich will pay their fair share, but no one will pay so much that it destroys jobs or undermines our ability to compete.
Eliminate special interest loopholes, make our business tax rate more competitive to keep jobs in America, create new opportunities and revitalize our economy.
Reduce the cost of childcare by allowing families to fully deduct the average cost of childcare from their taxes, including stay-at-home parents.
CONTRAST WITH HILLARY CLINTON
[@taxfoundation]

REGULATIONS
Ask all Department heads to submit a list of every wasteful and unnecessary regulation which kills jobs, and which does not improve public safety, and eliminate them.
Reform the entire regulatory code to ensure that we keep jobs and wealth in America.
End the radical regulations that force jobs out of our communities and inner cities. We will stop punishing Americans for working and doing business in the United States.
Issue a temporary moratorium on new agency regulations that are not compelled by Congress or public safety in order to give our American companies the certainty they need to reinvest in our community, get cash off of the sidelines, start hiring again, and expanding businesses. We will no longer regulate our companies and our jobs out of existence.
Cancel immediately all illegal and overreaching executive orders.
Eliminate our most intrusive regulations, like the Waters of The U.S. Rule. We will also scrap the EPA’s so-called Clean Power Plan which the government estimates will cost $7.2 billion a year.
Decrease the size of our already bloated government after a thorough agency review.
KEY ISSUES
The U.S. economy today is twenty-five percent smaller than it would have been without the surge of regulations since 1980. [@mercatus]

IMMIGRATION
Prioritize the jobs, wages and security of the American people.
Establish new immigration controls to boost wages and to ensure that open jobs are offered to American workers first.
Protect the economic well-being of the lawful immigrants already living here by curbing uncontrolled foreign worker admissions
– Select immigrants based on their likelihood of success in the U.S. and their ability to be financially self-sufficient.
– Vet applicants to ensure they support America’s values, institutions and people, and temporarily suspend immigration from regions that export terrorism and where safe vetting cannot presently be ensured.
– Enforce the immigration laws of the United States and restore the Constitutional rule of law upon which America’s prosperity and security depend.
Donald J. Trump’s 10 Point Plan to Put America First
1. Begin working on an impenetrable physical wall on the southern border, on day one. Mexico will pay for the wall.
2. End catch-and-release. Under a Trump administration, anyone who illegally crosses the border will be detained until they are removed out of our country.
3. Move criminal aliens out day one, in joint operations with local, state, and federal law enforcement. We will terminate the Obama administration’s deadly, non-enforcement policies that allow thousands of criminal aliens to freely roam our streets.
4. End sanctuary cities.
5. Immediately terminate President Obama’s two illegal executive amnesties. All immigration laws will be enforced – we will triple the number of ICE agents. Anyone who enters the U.S. illegally is subject to deportation. That is what it means to have laws and to have a country.
6. Suspend the issuance of visas to any place where adequate screening cannot occur, until proven and effective vetting mechanisms can be put into place.
7. Ensure that other countries take their people back when we order them deported.
8. Ensure that a biometric entry-exit visa tracking system is fully implemented at all land, air, and sea ports.
9. Turn off the jobs and benefits magnet. Many immigrants come to the U.S. illegally in search of jobs, even though federal law prohibits the employment of illegal immigrants.
10. Reform legal immigration to serve the best interests of America and its workers, keeping immigration levels within historic norms.

HEALTH CARE
cf. https://assets.donaldjtrump.com/Healthcare_Reform.pdf
Repeal and replace Obamacare with Health Savings Accounts (HSAs).
Work with Congress to create a patient-centered health care system that promotes choice, quality, and affordability.
Work with states to establish high-risk pools to ensure access to coverage for individuals who have not maintained continuous coverage.
Allow people to purchase insurance across state lines, in all 50 states, creating a dynamic market.
Maximize flexibility for states via block grants so that local leaders can design innovative Medicaid programs that will better serve their low-income citizens.
KEY ISSUES
President Obama said his health plan would cut the cost of family premiums by up to $2,500 a year. Instead, premiums have gone up by almost $5,000 since Obamacare passed.
Premiums have skyrocketed across the nation, with a national average of almost 25%, with some states experiencing rate increases up to 70%. In Iowa, one plan got a 43% increase approved. In Florida, the individual market will see an average rate increase of 19%. In Pennsylvania, at least three plans requested rate increases over 40%. And the average rate requested in Minnesota is 54%.

FOREIGN POLICY AND DEFEATING ISIS
Peace through strength will be at the center of our foreign policy. We will achieve a stable, peaceful world with less conflict and more common ground.
Advance America’s core national interests, promote regional stability, and produce an easing of tensions in the world. Work with Congress to fully repeal the defense sequester and submit a new budget to rebuild our depleted military.
Rebuild our military, enhance and improve intelligence and cyber capabilities.
End the current strategy of nation-building and regime change.
Ensure our security procedures and refugee policy takes into account the security of the American people.

ENERGY
Make America energy independent, create millions of new jobs, and protect clean air and clean water. We will conserve our natural habitats, reserves and resources. We will unleash an energy revolution that will bring vast new wealth to our country.
Declare American energy dominance a strategic economic and foreign policy goal of the United States.
Unleash America’s $50 trillion in untapped shale, oil, and natural gas reserves, plus hundreds of years in clean coal reserves.
Become, and stay, totally independent of any need to import energy from the OPEC cartel or any nations hostile to our interests.
Open onshore and offshore leasing on federal lands, eliminate moratorium on coal leasing, and open shale energy deposits.
Encourage the use of natural gas and other American energy resources that will both reduce emissions but also reduce the price of energy and increase our economic output.
Rescind all job-destroying Obama executive actions. Mr. Trump will reduce and eliminate all barriers to responsible energy production, creating at least a half million jobs a year, $30 billion in higher wages, and cheaper energy.

ECONOMY
Create a dynamic booming economy that will create 25 million new jobs over the next decade.
For each 1 percent in added GDP growth, the economy adds 1.2 million jobs. Increasing growth by 1.5 percent would result in 18 million jobs (1.5 million times 1.2 million, multiplied by 10 years) above the projected current law job figures of 7 million, producing a total of 25 million new jobs for the American economy.
Reform policies with a pro-growth tax plan, a new modern regulatory framework, an America-First trade policy, an unleashed American energy plan, and the “penny plan.”
Boost growth to 3.5 percent per year on average, with the potential to reach a 4 percent growth rate.
​KEY ISSUES
Over the last seven years, 14 million more people have left the labor force.
The lowest labor force participation rate since the 1970s.
1 in 5 American households do not have a single family member in the labor force.
23.7 million Americans in their prime-earning years [ages 25-54] are out of the labor force – an increase of 1.8 million over the last seven years.
Real GDP grew only 1.1% in the second quarter of this year. Over the last seven years, real GDP grew 2.1% the slowest seven-year period since at least the 1940s.
It’s the weakest so-called recovery since the Great Depression.
Hourly earnings and weakly earnings are lower today than they were in 1973.
The number of Americans on Food Stamps during Obama’s time in office has increased by more than 12 million.
2 million more Latinos are in poverty today than when President Obama took his oath of office less than eight years ago.
45% of African-American children under 6 are living in poverty.
1 in 6 American men between the ages of 18-34 are either in jail or out of work.
Student loan debt exceeds $1.3 trillion — nearly doubling under the Obama administration.
Since President Obama took office, the national debt has doubled.
U.S. trade deficit in goods reached nearly 800 billion dollars last year alone.
The U.S. homeownership rate fell to 62.9 percent in the second quarter – the lowest rate in 51 years. 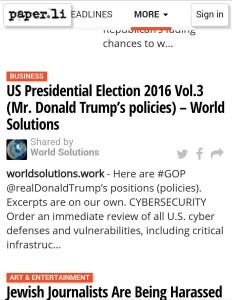