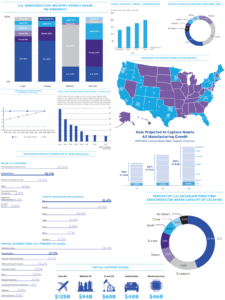 Overview Of The Semiconductor Capital Equipment Industry (01/15/2019) | @SeekingAlpha
Memory chips are used to store data electronically in the form of bits (8bits = 1 byte). The most common types of memory chips made by the industry today are Dynamic Random Access Memory (“DRAM”) and NAND flash. DRAM is volatile memory, which means it temporarily stores each bit of data in a separate capacitor while the associated device is powered on. DRAM is commonly used by data servers and mobile devices. NAND (short for NAND flash) is non-volatile memory (“NVM”), which means it stores data even if the power is switched off. It’s called NAND because it’s a type of memory that resembles the NAND (not-and) logic. NAND is commonly used in memory cards and solid state drives (“SSD”). The major trend in memory today is the switch to three-dimensional (3D) memory where memory cells are built vertically, instead of horizontally (planar), which increases memory bit density.
Logic chips are the fundamental building blocks for digital electronics. Logic chips are constructed from connecting individual digital logic gates that perform logical operations of AND, OR and NOT on binary numbers. (This is where the NAND or not-and comes from). Logic chips perform calculations that drive computer processing.
Semiconductor manufacturers are generally focused on designing chips for various device applications. The semiconductor capital equipment industry (“semi-cap” for short) provides the equipment for these manufacturers.
The semiconductor industry is to electronics what the mining industry is to finished metal products. Taking this one step further, the semi-cap industry supplies the “picks and shovels” for the broader semiconductor industry.

Understanding Memory – An inside look at different memory types and how they work. (02/15/2018) | @semiEngineering
While logic chips work as the “brains” of an electronic device, performing functions using mathematical operations, memory chips store data. The basic building block of a memory chip is a cell, a tiny circuit with a capacitor (which stores data as a charge) and one or more transistors (which activate data). The capacitor is either charged or discharged, corresponding to the two possible data values (“1” or “0”), where this smallest unit of data is known as a “bit”.
The cells are arranged in a row and have a bit line structure that connects into a memory “address” called a word line. The address provides a means of identifying a location for data storage, and the word line forms an electrical path allowing all the memory cells on that row to be activated at the same time for storage (“write”) or retrieval (“read”). Data access is initiated with electrical signals – a row address strobe (RAS) and a column address strobe (CAS) – that together pinpoint a cell’s location within an array. If a charge is stored in the selected cell’s capacitor, these signals cause the transistor to conduct, transferring the charge to the connected bit line, causing a slight voltage increase that reads as a “1”.

The basics of microchips | ASML

What is Semiconductor Memory? | @ROHMsemi

Shipments are forecast to hit 1.4 billion in 2021, according to Canalys, though supply constraints, including the global chip shortage, threaten to limit growth. https://t.co/ocsTTMm4Iu

A GlobalData report focuses on keywords and discussions about the chip shortage to assess impacts in the tech sector as disruptions reverberate across industries. https://t.co/3QyDQou6Iv

The company also announced its production expectations in light of the global chip shortage and the resulting manufacturing bottlenecks. https://t.co/DbvBhpOj3P