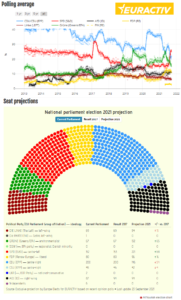 German voters say that climate is the most important election issue so why is the Green Party not polling higher? #GermanElection https://t.co/W8dv8YJM0C

German politicians should not neglect the deficiencies in the country's democracy, argues @gbuldioski https://t.co/mn6AD9IbCd

In response to the floods, Merkel approved 30 billion euros in aid but coming just two months before an election, it was the reactions of those who want to replace her that are under the microscope. #GermanElection https://t.co/V7k42iTIse

The chancellor frontrunners in Germany went head to head in the final televised debate ahead of Sunday's election, as they discussed closer cooperation in Europe and a common approach in foreign policy. #GermanElection
https://t.co/qyjCcKwD5T

Merkel was the stability of the Franco-German partnership and now a new balance will have to be found for this relationship. #GermanElection https://t.co/8a0TPNZL8J

"I don't see a grand coalition happening again" says @spornschlegel who think either a 'traffic light' or 'Jamaica' coalition would work but with difficult negotiations.

She does not expect to have a #German govt till the end of the year. #GermanElection2021 pic.twitter.com/7SBw0LQ9ET

As the world bids au revoir to Angela Merkel, France is already thinking ahead https://t.co/zXAycir3gk

.@COdendahl says that the more constructive Britain is on foreign and security policy matters, the better the UK-Germany relationship will be – these areas are where Germany’s concerns are, and where London can contribute.

.@COdendahl argues that German perceptions of debt have shifted over the last 5 years – partly because climate change is on the agenda more than ever before, which requires a more pragmatic approach to public investment and debt.

“She misunderstood the euro crisis as a debt crisis, when it was so much more than that. The difference in how she reacted to the euro crisis and then to the pandemic is, I think, quite telling.”@COdendahl spoke to @AaronGBurnett about Merkel's tenure.https://t.co/y6QdZDqZwN

One of the most significant (and underreported) shifts in Germany in recent years is a willingness to embrace debt mutualization and looser fiscal rules.
What changed? To find out we talked to leading economists @FuestClemens @COdendahl and @GFelbermayr https://t.co/R8hcCLFY6m

What @emilyrs left out of her excellent piece (and may cover in another piece) is the #Merkel vote among Germans with foreign roots post-2015, which will form >10% of the voting population. I looked at it in January. https://t.co/l5bqavi8xI

How long did it take for previous German governments to form? #btw2021

If from the same block: 1 month.

If not … increasingly long. (# of Days between election day and swearing in of the new government) pic.twitter.com/lDxEht4xGV

By popular demand: here are the districts that the #Left party won in Berlin in 2017. All by wide margins. pic.twitter.com/CZdNI9Q5sj

In a @CER_EU podcast, @ClaudMajor @SWP_IntSecurity, @LScazzieri and @SophiaBesch discuss the forthcoming federal election in Germany and its implications for German foreign, security and defence policy, including Germany's relationship with the US & China. https://t.co/AbZPMwYnrD

TONIGHT: @DeBalie will discuss Germany’s political future & the impact of the #BTW21 result on European integration & solidarity. Check out the #livestream on their website: https://t.co/n9D4FzfYlV @jana_puglierin @ECFRBerlin @LuukvMiddelaar @BovenLaurens

The parties in Germany’s next coalition government could find it hard to bridge their differences on foreign and defence policy, writes @RikeFranke ahead of the German election #btw21 this Sunday. @ECFRPower https://t.co/C4GO1LplUG

"A little less conversation, a little more action, please" requests @lykkefriis from a post- #Merkel Germany. What do other European expect from the country after today's #BTW21? Find out here: https://t.co/PraF5gM2bX #ElvisHistory pic.twitter.com/000BOyuZfS

With energy & climate policy at the top of the next German chancellor’s agenda, the make-up of the ruling coalition will have a huge influence on Germany’s relationship with #Poland & its other partners in central & eastern Europe. @moscicka_dendys #btw21 https://t.co/leaYDvl30T

After a decade and a half in power, the #Merkel era is coming to an end. What do Europeans expect of post-election Germany? Find out in one of our latest policy briefs by @PiotrBuras1 and @oertel_janka. #btw21 @ECFRPower https://t.co/PraF5gM2bX

How much do Europeans trust Germany to lead and defend their interests globally? Find out in our latest opinion polling and study by @jana_puglierin & @PiotrBuras1 https://t.co/PraF5guqNn #BTW21 #Merkelism @ECFRBerlin pic.twitter.com/ry4klXKolx

Unless #Germany quickly shows its mettle on democratic values in its relations with other member states, #democracy will fade even more rapidly as the governance system within the EU – not only outside it. @gbuldioski #BTW21 #ViewfromtheCouncil https://t.co/pNdzr67pWn

It was not entirely easy to write about Merkel’s legacy in security and defense policy – in which she has been primarily one thing for the past sixteen years: absent! https://t.co/8EljBEmd88

How much attention does the #BTW21 get in the US? @JyShapiro explains the situation in America & what citizens and the administration expect from the post- #Merkel Germany. More on this topic: https://t.co/O1PQG1n7Hp pic.twitter.com/Z6oBNmQTiO

A major challenge facing the #EU is applying the lessons of the Afghan conflict to the region that poses the most serious security threat to Europe: the #Sahel, writes @AranchaGlezLaya. #ViewFromTheCouncil @ECFRAsia https://t.co/MFaxBwbY21

ECFR’s survey shows that nearly two-thirds of EU citizens believe that there is a new #coldWar developing between China and the US. Only 15% disagree. #ECFRdata https://t.co/86AG1n4Rmn @markhleonard pic.twitter.com/2xbECDXbYD

In our last weekly #btw21 update before Sunday’s election, DW’s @NinaHaase and @MKuefner take us to the final campaign events of two of the chancellor candidates in the narrow race to succeed Angela Merkel. pic.twitter.com/EtMsU7pL7y

Change has been the buzzword of the German election campaign, but much of it is merely paying lip service — especially in the case of Merkel's Christian Democrats | OPINION https://t.co/VJ0Qk4Kbe6

The board is set, the pieces are moving — the German election is almost upon us.

Still confused on how it all works, or who's voting and why? We got ya. pic.twitter.com/W7ZlJ95WdR

Among the promises made by more than 35 countries is a German commitment to increase its own proportion of renewable energy in total electricity consumption to 65% by 2030.
https://t.co/mCh3OdVTyt

A photo of Angela Merkel overwhelmed by parrots went viral, but the German chancellor has a long track record of animal encounters.https://t.co/6l0FVruaoF pic.twitter.com/TqvjjGh2YK

Germany votes on Sunday. Here's what the parties promise: https://t.co/cl4nD0CrrP

Chancellor Merkel's CDU is flagging in the polls — and conjuring up the familiar threat of a far-left takeover by an SPD-led coalition with former communists.

But would such an alliance really be possible?https://t.co/USM8oo5vsp

Thousands of young people across Germany and the world took part in the 'Fridays for Future' rallies to demand urgent action on the climate crisis. pic.twitter.com/MvQHo6XFWb

Germany's chancellor hopefuls hold their last campaign events around the country ahead of Sunday's vote.

The race is close, and who leads the country into the post-Merkel era is far from decided.https://t.co/0xJWuCvWwZ

"Our partners can rely on us, and our competitors must continue to reckon with us," German President Frank-Walter Steinmeier said in a speech to the UN General Assembly. https://t.co/nnCQcuPG7i

Merkel turns out one last time for chancellor candidate @ArminLaschet at conservative CDU/CSU campaign finale #Oktoberfest style in Munich.
Tangible tension in conservative camp that it will be tight to beat SPD’s @OlafScholz in Sunday elections. pic.twitter.com/qiZ1ZNTgQu